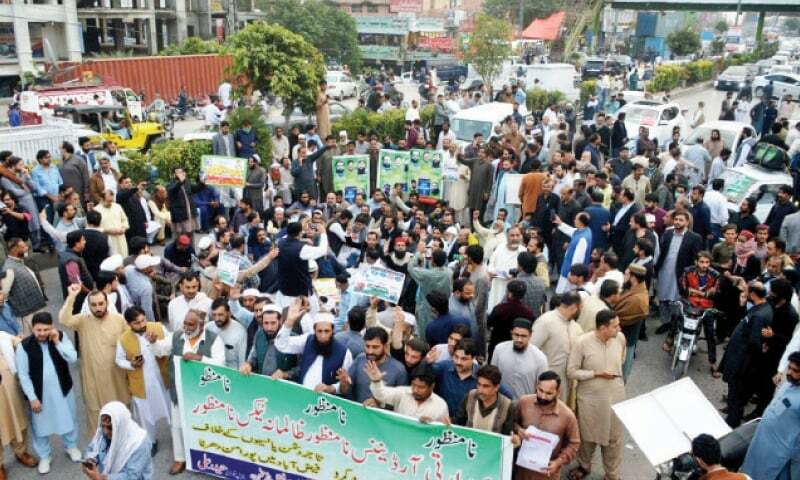 ISLAMABAD: As residents of the Twin Cities breathed a sigh of relief after a protest march to the federal capital was suspended by the banned Tehreek-i-Labbaik Pakistan, commuters were made aware of the blockade of the ‘Faizabad interchange by traders Tuesday evening.

The traders had warned the government to start a protest by blocking the Islamabad highway and the intersection between the twin cities if their demands were not met.

By the way, neither the federal government nor the Islamabad district administration nor even the general public took the matter seriously. As a result, evening rush hour commuters witnessed traffic jams after all of Pakistan Anjuman-i-Tajiran organized a Zero Point rally in Faizabad and held a sit-in there.

The peaceful sit-in continued late into the night with members of the business community protesting for approval of their nine-point demands.

Led by Ajmal Baloch, Pan-Pakistani President Anjuman-i-Tajiran and the Traders Action Committee Islamabad, the main demand of the protesters was the withdrawal of the presidential ordinance which authorized the tax collection agency to install detection devices. at points of sale to determine the actual amount of cash flow in businesses.

Addressing the rally, Mr Baloch said traders would not comply with the presidential ordinance or allow the Federal Board of Revenue (FBR) to impose sales tax devices on their businesses.

â€œWe demand that the government and the RBF implement the fixed tax system or the self-assessment system. This sit-in has proven that we will stand firm in our commitment to resist the government’s decision to install devices in points of sale, â€he added.

He said the government and administration should immediately stop harassing the business community, adding that giving police powers to the RBF would only increase the corruption of tax collectors and eventually all items will become more expensive. for consumers.

As the Faizabad and Islamabad highways were blocked, motorists faced confusion and scuffles were reported between protesting traders and motorists.

The situation became dire as another protest rally of traders from Rawalpindi stealthily moved towards Faizabad to converge with their counterparts coming from Zero Point.

The role of the operations police and the traffic police remained negligible because the roads were congested. However, after the protesters reached Faizabad, traffic began to flow on one lane of the roads.

Commuters expressed their displeasure with the police as neither Islamabad traffic police nor Rawalpindi traffic officers tried to manage the blocked roads.

“It took me four hours to reach Chandni Chowk from I-8/3 because the junction of Stadium Road and IJ Principal Road was blocked,” said Imran Ahmed, a resident of Committee Chowk.

On the other hand, a traffic policeman stationed in Shamsabad in Rawalpindi expressed his inability to cope with the situation, claiming that Faizabad was unexpectedly blocked and therefore traffic was blocked at almost all intersections. He said if an alternative plan had been devised, rerouting normal traffic could have been easy.

More than 250 corps of traders belonging to the town of Rawalpindi and the two cantonments took part in the sit-in.

Meanwhile, the Rawalpindi Chamber of Commerce and Industry (RCCI called on the government to involve stakeholders to solve the problems faced by the business world.

RCCI President Nadeem Rauf said the RBF should focus on broadening the tax base instead of setting tax collection targets.

Security officer filmed pushing and suffocating teenagers after being “slapped”