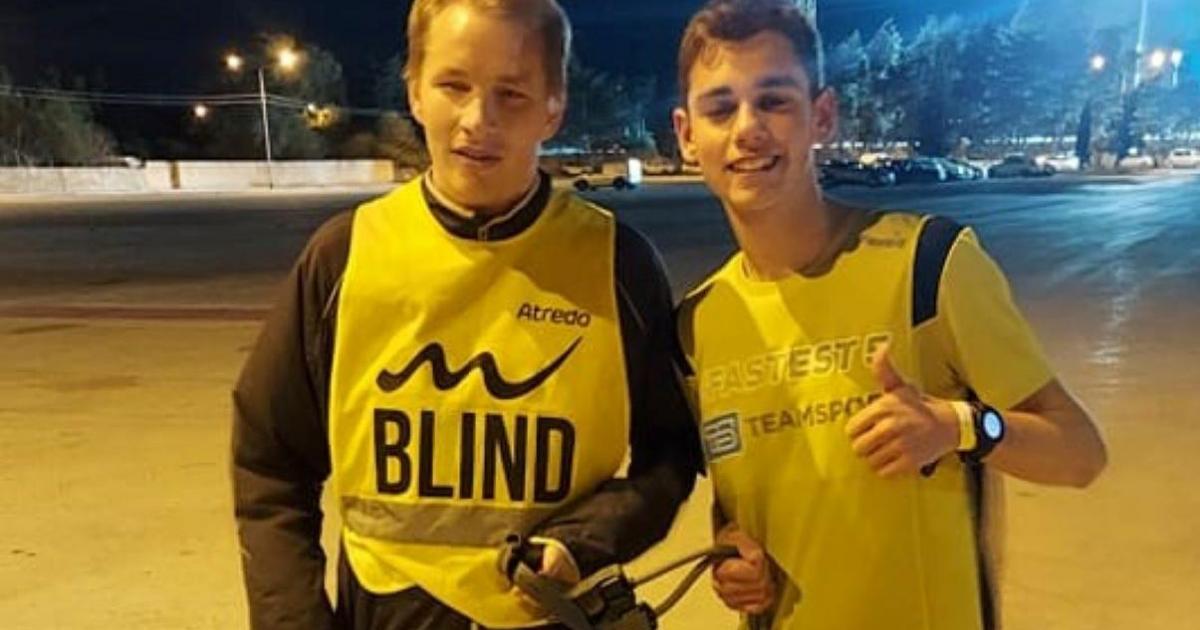 First visually impaired athlete to participate in the Malta Half Marathon

In a quiet parking lot just opposite the Ta’ Qali National Stadium, a group of 13 athletes warm up before their race session on a windy and cold Wednesday night.

Their trainer, ultra-triathlete Fabio Spiteri, guides them through their exercises to make sure they’re warm and stretched out before they kick off their 10-kilometre run.

Among the runners is 29-year-old Jesper Mathiesen, who, like the rest of the team, performs the high-knee drills before heading into the race.

Like the others, he wears a warm zip-up sweater with a high collar to protect himself from the biting wind.

But unlike the rest of his teammates, Jesper also wears a high-visibility safety vest with the word “blind” spelled out on the front and back.

The Danish runner was born with a serious eye condition, which left him with just 5% of his normal vision as a child, and worsened as he got older.

Still, that hasn’t stopped Jesper from competing in road races and half marathons over the years. In 2019, he even climbed Africa’s highest peak, Mount Kilimanjaro.

Now he is training to run 21km in the upcoming Intersport Valletta Half Marathon, which will be held for the first time on April 24.

Jesper will be the first visually impaired athlete to take part in a marathon race in Malta.

“I can understand that other (visually impaired) people might find it difficult at first, especially if they don’t practice a lot,” Jesper told The Times of Malta.

“I also didn’t think it would be possible to race here, but I thought, let me try, and here I am.

“When I had a bit more vision I used to play football but now that’s not possible anymore. Running is a bit easier and a good way to challenge and surpass yourself.

Growing up, Jesper underwent a series of corneal surgeries.

“It’s not much, but it’s not total darkness,” he says of the small vision that remains.

“I can see some shapes and outlines up close, even though everything is blurry.”

Jesper has been living in Malta since September, working as an Affiliate Coordinator at a gaming company.

He said he was starting to find it boring and repetitive to run on a treadmill in a gym.

“I try to run two or three times a week. On a treadmill I can do it on my own, but outside I need someone to guide me, especially with the traffic, and the roads here are not in the best condition,” said he declared.

Back in Denmark, he would run alone in the countryside or with one of his relatives riding a bike alongside him. He also ran and trained in the city center, with a running mate.

Earlier this year, Jesper took a chance on a popular Facebook group for expats, asking if there were any remote outdoor spaces where he could run.

Spiteri contacted Jesper… and the rest is history.

“It’s a first for me (training someone with a visual impairment) but I took him on board…he’s now part of our team,” Spiteri said.

Everyone takes turns guiding Jesper, to make sure he avoids any obstacles throughout the race.

A short rope or “longe” connects Jesper and his running mate to guide him through the course.

“It wasn’t really difficult running with Jesper, it’s like running alongside a friend,” Spiteri admitted.

For the half marathon, Jesper’s running mate will be Tommy Wallbank, one of the youngest members of Team Fabio.

Jesper runs at a pace of five minutes per kilometer, which the Dane describes as average.

He warmly thanked his parents, who he says deserve an “honour” for raising him the same way they raised his sister.

“Family and friends have always looked forward to me being able to participate with them, so when you have that feeling and that support, it helps you push yourself more and be part of the community,” Jesper said.

Independent journalism costs money. Support Times of Malta for the price of a coffee.

Customers buying a drying bag for their dogs