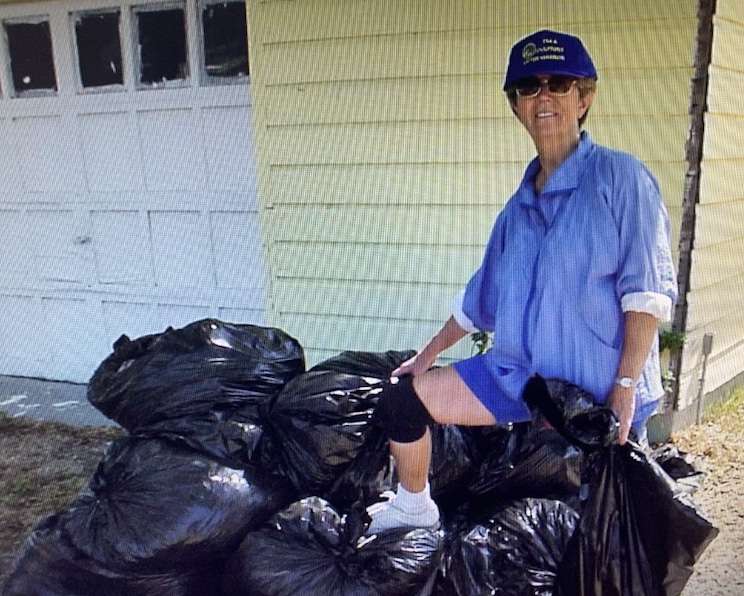 Dawn Fisher likes things tidy. You’ll find her in the early morning hours, a playful figure in her neon yellow safety vest, picking up litter from the side of the street with a long plastic claw.

“It’s a pickaxe,” she said, snapping the pliers open and close. She always wears one, just in case. She’ll give you one too if you promise to help pick up the trash. And – because she likes things organized – she’ll add your name to the list of neighbors patrolling with sticks that she keeps hidden between various newspaper clippings, photos and certificates in her large scrapbook.

Fisher began picking up trash while serving on the Gulfport City Council (2001-2005) to care for the community she loved, years after her first visit to Gulfport in 1986. provided many more.

Every Friday, she recalls, “you would take a thick notebook of city business to revise. It was like being back in college! And you could always tell at the meetings who had worked on their books. During his tenure, the City Council introduced many significant projects, each carefully documented in the scrapbook: the renovation of Fire Station 17, a million-dollar renovation of the casino, and the opening of 49th Street. Neighborhood Center.

Then came the Human Rights Ordinance.

The 2005 ordinance protected residents, visitors and employees from discrimination based on sex, gender identity or expression, sexual orientation and appearance. And while today’s city proudly embraces its distinction as an LGBTQ-friendly community, the HRO sparked controversy when Ward III council member Harry Brodhead, spurred on by discriminated residents, introduced the idea in 2004.

Although the HRO died after his tenure, Fisher’s voice joined those urging Gulfport to move forward. As the first openly gay member of the Gulfport City Council, she was part of the historic transformation underway.

“Gulfport was becoming more diverse,” she recalls. “There was a new opening.”

The city also began to change in other ways. With the area’s first art walk in 1993, Gulfport began to cultivate an “artistic aura” that attracted visitors. For Fisher, a poet for more than 50 years, it was another reason to love Gulfport. The emerging art community reminded him of his childhood trips to Chicago, where his mother – who once wanted to act – introduced her children to museums, theater and an artistic circle that included painter Doris Lee and musician Hoagie Carmichael.

So when Eileen Navarro of the Gulfport Community Players asked for help funding a permanent space in 2007, she offered GCP the $250,000 needed to purchase the Back Door Theater, in honor of her mother.

“It takes people doing their job to make a community thrive,” she points out. “Not looking for money or putting their name on things.” It all boils down to a simple personal philosophy: “I get involved!

And then she puts on a rubber glove with one hand and picks up her pickaxe with the other. There is still a little to do today.

Meet Dawn Fisher at Gulfport Stories on January 28 at 7 p.m. at the Gulfport History Museum.

The Gabber team has brought back the print version of the newspaper and we’ve redesigned our website to make it easier for you to get the news. We’re not out of the woods yet, and every little bit helps pay for our reporters, printer, and other expenses. Support local news and families – donate now to keep The Gabber Newspaper serving the community it loves!