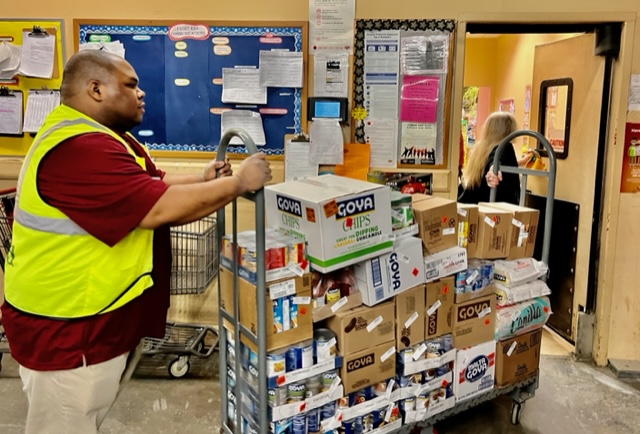 BETHLEHEM — A lot of people had written off Nah’Quis Williams.

He is deaf, non-verbal and has severe autism.

Experts declared him unfit for work.

“I wouldn’t accept that,” said her mother, Nanesha Davis, of Albany.

“His mother and I were determined to help Nah’Quis achieve what he wanted most: to find a job and earn his own money,” said Cathy Nasser, his professional coach, who has worked with Williams for 14 years.

“We wouldn’t let him lose his dream,” Nasser said.

Both women have been relentless in helping Williams reach a potential few believed possible. He is a popular part-time employee of the Hannaford Supermarket in Delaware Plaza, where he stocks the shelves in four-hour shifts three afternoons a week.

“We’re lucky to have Nah’quis. He has a strong work ethic and takes pride in doing a great job,” said Dave Leue, Assistant Store Manager.

Managers presented Williams with the Service Star of the Month award in March. The monthly recognition is given to an exemplary employee who receives praise from customers and colleagues for outstanding service among the 110 employees. Williams, 25, has worked at the store as a stockman for nearly three years, always with Nasser by her side.

Along with showing up early and staying late for his shifts, Williams is known as “the best blocker in the store,” Williams said.

He is obsessed with lining up rows of canned and canned foods in precise columns on the shelves, ensuring that each label is aligned straight forward – never out of alignment. “Blocking” and “packaging” are terms used in supermarket parlance to describe tidy and attractive product shelves that attract shoppers.

“We consider expert blocking a superpower, and Nah’Quis has it,” Leue said.

The road has been difficult for Williams, her mother and Nasser, a special education assistant who started working with Williams when she was 11 years old.

“Since my son can’t speak, I’ve been his voice and his advocate,” said his mother, who communicates with him using sign language, as Nasser does.

Williams is a graduate of Maywood School, a K-12 special education program in Albany, as well as Career & Technical School, or CTE, both operated by Capital Region BOCES. He also crossed the stage when Albany High School returned in 2018.

“Nah’Quis graduated three times and all he ever wanted was to find a job,” his mother said. She and Nasser backed down whenever they tried to help her find a job.

Davis is a former part-time deli worker at Delmar Hannaford and she spoke with a manager, who set up an interview for Williams. With Nasser by his side, Williams was offered a job.

“Thank goodness for Mrs. Nasser. She has been a blessing to Nah’Quis and to our family,” Davis said.

Nasser has worked with many students with special needs, but she developed a special bond with Williams after working with him for so many years.

“He’s a very smart young man with a terrific work ethic,” Nasser said. “We joke that he is lucky to have two mothers, one black and one white.”

At Hannaford, the worker and the job coach form an unlikely duo. She is a 65-year-old gray-haired grandmother of two children. Williams, towering over his trainer, is a one-man bear who weighs over 300 pounds.

“He’s a gentle giant. Everyone loves him in Hannaford,” said Nasser, who has a teenage grandson with autism.

I met them on Monday afternoon as Nasser and Williams pulled out a large industrial cart stacked 4 feet high and several rows deep with 20-pound bags of jasmine rice, boxes of Spanish Goya rice and crates of Goya canned black beans, salsa bottles and other Goya products.

“We call it Goya Monday to stock up after customers buy tacos on Tuesday,” Nasser said.

Reaching deep into the depleted lower shelves, Nasser lays sideways and lines up cans of red and black beans and chickpeas. He empties each crate and hands the empty box to Nasser, who piles the empty containers at the end of the aisle.

There are hundreds of pounds of products in the cart which it will lift, reach, stretch and place on shelves. He will stock four or five trolleys worth of product during his four-hour shift.

“Even if his shift is over, he won’t leave until the last can is put away,” Nasser said.

Her mother looked at her meticulous work of Hannaford and smiled. “This is what our pantry looks like at home,” she said. “He doesn’t like anything out of place.”

As Williams emptied cases of cans and boxes of Goya products, lost in his work, he sometimes smiled, laughed to himself and waved with his hands.

“He’s just talking to himself,” Nasser said. “He takes pride in his work.

A significant addition Nasser made was to add lettering to his yellow safety vest that read: “Deaf Associate”. This avoided confusion among customers who asked him questions without getting an answer. Nasser interprets with sign language or a client writes a request on a sheet of paper.

Williams is particularly proud when helping a customer find an elusive product in an aisle where he is stocking shelves.

“I call it her Vanna White movement,” Nasser explained. “He’ll turn around, smile, throw up his arms, and hand the customer a specific can of green beans he couldn’t find.”

Nasser said Hannaford was an exceptional employer who paid him an hourly wage in addition to Williams and provided for all accommodation needs.

“They’re a team, they do an amazing job, and they add value to our store,” Leue said.

Nasser uses his salary to buy clothes, sneakers and electronics. He recently bought an iPad and installed Proloquo2Go, a communication app on which he types symbols that are converted into a voice that speaks his sentences.

Nasser serves as a relief worker for Williams’ mother, who also has a 16-year-old son. Williams cooks a full breakfast for her family on Sunday mornings, does her own laundry, and runs her own errands in Hannaford. Nasser taught Williams to swim, took him bowling and to the movies.

She is impressed by what she describes as her photographic memory. She told the story of a substitute van driver who transported Williams and eight other disabled people to a day program. The driver relied on her phone’s GPS for directions, but her phone ran out of power and she didn’t have a charger. She started to panic. Williams moved to the front seat and used hand signals to tell the driver where to turn. As a navigator, working from memory, he brought all the passengers home safely.

“Nah’Quis is like family to me,” said Nasser, whose 20-year-old husband James died last September. “He enriches my life.”

I had a question that she signed to Williams. What is your favorite part of the job?

“I work Thursdays,” he signed back. “I get paid on Thursdays.”

Paul Grondahl is director of the New York State Writers Institute at the University of Albany and a former Times Union reporter. He can be reached at [email protected]