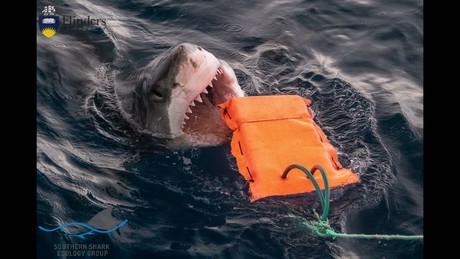 Marine researchers at Flinders University have tested wetsuits that can help reduce blood loss from shark bites, reduce injuries, and prevent the leading cause of shark bite death.

“The purpose of this study was to assess the ability of new tissues incorporated into neoprene to reduce white shark bite injuries,” said Associate Professor Huveneers.

“Our results showed that both tissues tested may offer some protection against shark bites and could be used as part of a shark bite mitigation strategy.

“We tested the fabric on white sharks as it is the species responsible for the highest number of shark bite deaths.”

“We found that the new fabrics were more resistant to punctures, lacerations and white shark bites than standard neoprene,” Associate Professor Huveneers said.

“More force was required to pierce the new tissue compared to the control tissue (lab tests), and the cuts made on the new tissue were smaller and shallower than those of the standard neoprene of both test types (tests in laboratory and in the field). “

Associate Professor Huveneers said the results are positive but more testing is needed in an integrated suit design and on potential damage to human flesh below for more robust recommendations.

“While these tissues may reduce blood loss resulting from a shark bite, more research is needed to measure the extent of damage to human flesh.”