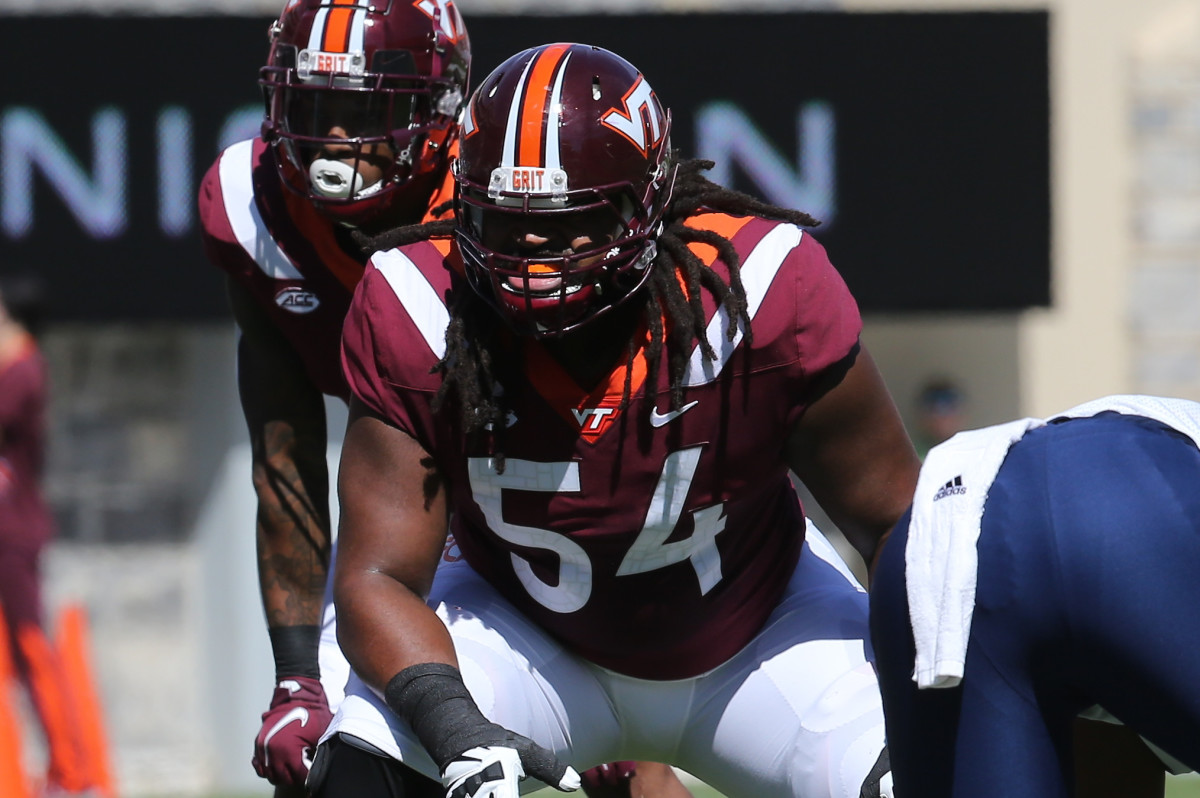 More than 200 guys had their chances in the NFL Draft this year, and a handful of guys were picked up by teams afterwards. But one of those 262 lucky players who got the phone call was Virginia Tech left guard Lecitus Smith. Smith was the 215th overall pick by the Arizona Cardinals.

Smith racked up a lot of honors over the years at Virginia Tech. In 2020 alone, he was voted to the PFF College National Team of the Week for October 10; All-ACC Third Team, All-ACC Second Team, and an All-ACC Honorable Mention.

Although Smith spent years honing his football skills to eventually take it to the next level, his heart wasn’t always set on football.

He enjoyed watching football with his brother, who became an inspiration for him to start playing.

“One day he told me he was like, ‘Lecitus, you gotta ask daddy to sign us up for football,'” Smith said.

Smith told his dad about it, and his dad was on board with a condition.

“Okay, but you come out and get hit, you better not start crying,” Smith said. “He signed me up, I went there for the first day of training, we put pads on. I’m really small – and we do this punching drill, and I get kicked and I fall on my butt and immediately start crying.

Although the first day of football was not so easy for the eight-year-old, Smith still found love for the game and came back on the second day ready for more. Smith played until high school, describing himself as a scrawny, scrawny freshman who didn’t get a chance to play right away. Smith’s odds were not in his favor as there were seniors down the stretch.

In year two, however, the starting tight end dropped and Smith got his chance to play. Ultimately, his playing time was limited, but he knew he would play more in his college career. By the time he arrived at Virginia Tech, he transitioned to offensive lineman.

Years later, and after an invite to Reese’s Senior Bowl, Smith landed in the position of being drafted into the NFL. The hard work he put in over the years would only be the beginning.

“Since the combine ended for us, I’ve been here every day practicing,” Smith said. He took training and workouts seriously, noting that he wants to be fit and ready to go on day one.

“Some teams want you to report a day later, two days later, maybe three, there’s a quick turnaround,” Smith said. “If a team comes to get me, they really need a guard, and if they dump me right away. It’s one thing to be in the NFL, but actually playing, it’s going to be crazy, especially if it’s ‘is fast.

Smith’s hard work helped him stand out in this year’s draft, due to his athleticism, ability to move, reaching the second tier and being able to stop the rush. bulls.

Smith turns to guys like Christian Darrisaw, the Minnesota Vikings’ starting left tackle, for advice on anything. He also reaches out to Wyatt Teller, especially since Smith was a young man when Teller was in his senior year. Both guys helped Smith become the athlete he was meant to be.

Smith took advantage of the pandemic, especially since he wanted to continue his training and workouts in case he and his team returned to the field.

I still have videos from two years ago, I was practicing in my living room with my school bag full of books,” Smith said.

He got creative using things from around the house. Since he couldn’t make it to the gym, he used to try to balance out what he lacked. He explained that there are people who say, “I didn’t go to the gym today, so I’ll work twice as hard tomorrow”, don’t think in the best frame of mind and should instead find the motivation one way or another. This thought process helped Smith hold himself accountable.

“I feel like that’s how a guy can show real resilience,” Smith said.

Smith also used yoga to become flexible, to help with knee bends and to focus on training in that regard as well. He discovered that yoga was good for physical and mental strength, but that he mainly focused on his physical aspect.

Smith has kept a cool head over the years, which ultimately led to his composure in the NFL Draft. His helpful advice to young athletes is not to enter college with an ego. Every level you go up, there are as many people as good as you. He also talked about the importance of listening to your coaches. They get paid to do their job and they want to win, so they’ll put the best possible player on the pitch. It is always best to listen and get the necessary feedback from coaches so players can be successful.