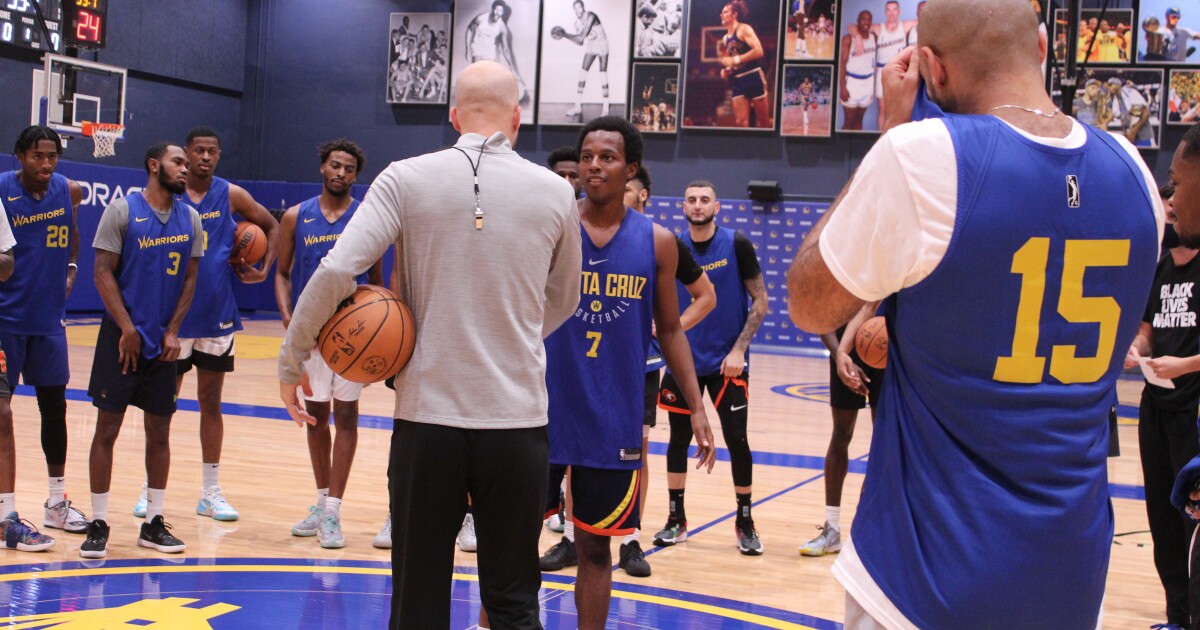 Q&A: Meet the security guard who shot a professional ball with an invitation to the Santa Cruz Warriors training

In September, the Santa Cruz Warriors hosted their invitational training for G League players at the Chase Center in San Francisco, home of their parent club, the NBA Golden State Warriors. While many promising young players come to show off their skills, one guest stands out for a different reason.

Jon Amey, a full-time security guard at the Chase Center, was invited to the Player Development Showcase after years of telling the coaching staff he could play and would like to prove it to them. Although he ultimately didn’t get past training, the 26-year-old Oakland player said it was the experience of a lifetime.

He sat down with Lookout to remember how it happened and the things he will never forget.

Q: When you were younger, what role did you play? What was your style of play?

As a kid, when I played on Pop Warner’s teams, I played forward and center because I was taller than most kids my age. Then, towards elementary school, high school and college, I played the playmaker position more because I didn’t get taller than 6ft so I didn’t have much choice but to move on to that role and learn to play well.

Q: Did you have any idols in the league growing up or someone you tried to model your game on?

I was very attached to Allen Iverson. He was really my guy because of his attitude and his playing. I just liked how, even though he played on a really tough team without a lot of supporting cast, he always took a leadership role where he made sure his teammates were involved. Another guy would be Russell Westbrook because he’s similar to my playstyle: very aggressive, very physical, likes to dunk and has a lot of energy.

Q: Have you ever played at university or elsewhere?

In college (in Cal State East Bay), I only played intramural sports, so just the recreational league within college. I did this for a few years, then took a lot of basketball lessons just because I wanted to keep playing the sport. Been there for a long time, but after college I just played a lot of street court pickup games and stuff like that.

Q: Was there a time when you felt you had more to offer gambling after college?

Q: I need to know how this happened. Tell me the story of the invitation to the G League invitation.

So before the invitation, every time I saw [Director of Team Development] Ryan Atkinson or any member of the basketball operations staff, I was like, “Hey, you should get me down there someday because, you know, I can keep this person, I can keep these. guy “, and just say things like that all the time.

He was just like, “Yeah, we’ll take you there someday,” and I thought we were just playing. Then one day, maybe a few months before the invitation, Ryan came over and said, “You can play a little bit, right?” I said I have been playing for a little while; I can play good defense, not a good shooter but I can do everything else, so he says he’s going to give me a try.

All the time I think he’s playing and just making his mouth run. Then a little later [Santa Cruz Warriors General Manager] David [Fatoki] asks if I’m ready to come down tomorrow, and then I’m really excited. I was like, “Oh man, they’re really gonna put me there!” I had to prepare my body for this and they made sure I had all of my information and vaccines. I used my personal day to take a day off so I could go and do what I had to do.

Q: What was it like coming out on the pitch and realizing it was really going on?

It’s extremely exciting because I’m in a room with future stars, Hall of Famers, whatever you want. They have always played and obviously they are bigger than me and more physical. They all weigh over 200 pounds and here I weigh 167. A little small for this job, but I wasn’t going to be put off now. I went there and did all the passing and shooting drills, where I realized the professional courts are much taller and wider than the ones I play on the streets. I had to adjust my shots a bit, and it was difficult to try to shoot those 3 points. I went, I think, 5 for 20, so I guess that’s fine for pulling that type of range.

Q: If you had to pick one thing, what gave you the most rush?

I felt like passing, where a guy runs towards you and passes the ball, then you give it back before he comes near you, then he gives it back to you, and then I have to end it again wearing. I’ll tell you, it was one of the most confusing things at first. I finally got it towards the end, but I had never done it before, so I felt a little out of place – I sweated a lot.

Q: Even if you can’t do it, what’s your biggest takeaway and what will you have for the rest of your life?

Being focused and learning to compete at an elite level is very important. Making sure my mindset is ready for certain situations, prioritizing speed and communication and whatever plays a role in the game. Just looking at how players communicate with each other to make sure they do what they have to do. It’s so much more than running and shooting, so I’ve learned that communication and your awareness are really important.

Q: Is there something that you are going to gain from this in your daily life, even if it is not related to basketball? Something that will inspire you for years to come?

The most important thing is self-discipline and humility. My main sport right now is martial arts, so I think personal development, discipline, and just being humble in the sport are important. Not having an ego and coming out there with a mindset to prepare. I will always remember to be professional and ready to go.

Security officer filmed pushing and suffocating teenagers after being “slapped”