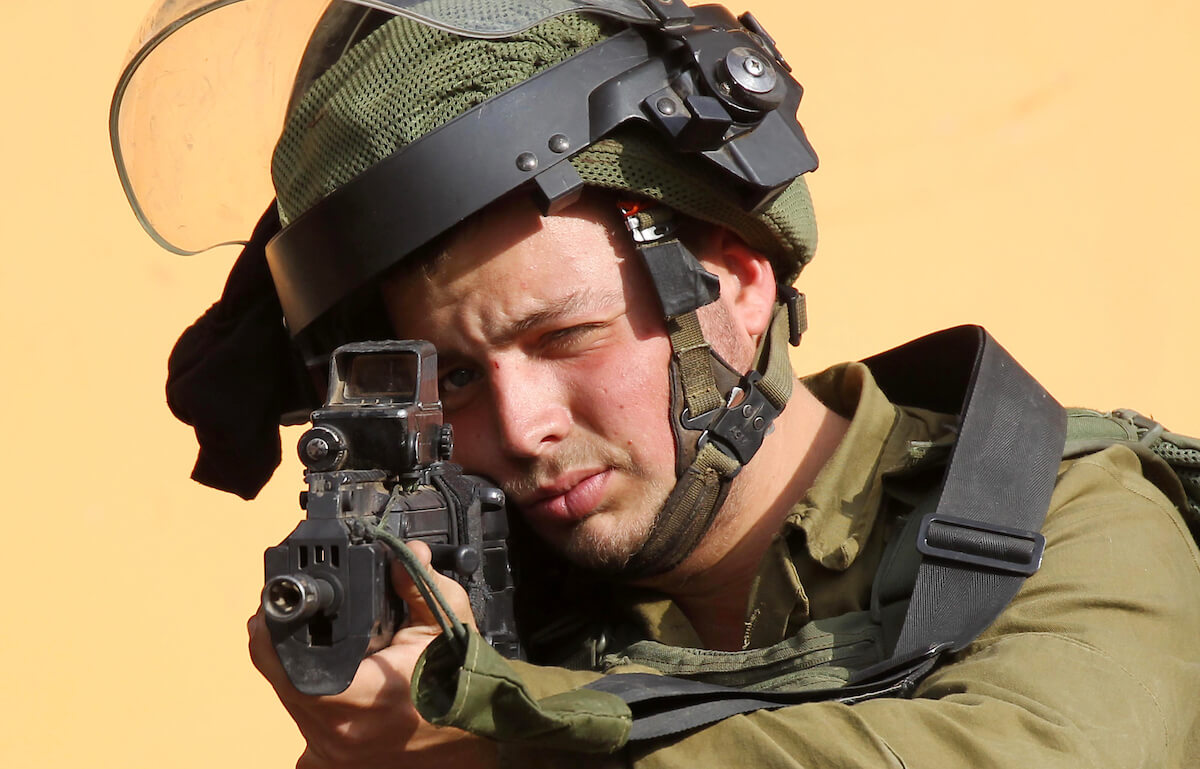 A month has passed since the assassination of journalist Shireen Abu Akleh. The overwhelming consensus at this point is that she was killed by a member of the Israel Defense Forces. And not a day goes by that I don’t think of his killer and the system that allows such murders.

As I live in the United States and do not have access to Al Jazeera, I had never heard of Shireen Abu Akleh. The news came to me via SMS on WhatsApp from a young priest in Ramallah who wrote,

“Dear God, my heart ached so much… They intentionally killed Shireen… She was targeted. We are all targets. truth and justice What is asked of the Palestinians today is: 1) to speak out without fear, 2) to expose the brutality of the Israeli occupation 3) to show the daily theft of our precious land by the Israeli government. Shireen is dead but her microphone is still alive… the sadness is immense, but the hope for justice is greater.

Since the message from the priest, I have devoured every word I could get my hands on to learn more about Shireen Abu Akleh and his killer. I cried watching the attack on his funeral. I watched proudly as a young Palestinian put himself in danger to try to save her as bullets swirled around him. His funeral and the procession brought back sad memories and pride of my childhood and reminded me of the murder of my distant cousin who was burned alive by Israeli soldiers, and whose Israel also tried to stop funeral. His assassination also reminded me of being an eyewitness to the massacre of a young Palestinian in Ramallah when I was eleven years old. The murder took place at the start of the Israeli occupation by an undercover Israeli Mossad agent. The murder of Abu Akleh rekindled the nightmares I had experienced for years following the brutalities and murders I had witnessed first hand.

It took me years to stem the nightmares of my experience of living under Israeli occupation. I trained myself to forgive their misdeeds in order to sleep in peace. But with every murder, land theft, abuse and blatant disregard for the humanity of the Palestinian people, I feel lost. I wonder what it would take to bring justice to the indigenous Palestinian population. I wonder about the silence or the lackluster response of the so-called defenders of justice and peace. I question those who reject intentional killing using words like “clashes.” an initial New York Times headline simply stating that Abu Akleh was “dead at 51” as if she had had a heart attack. I question a ruthless world that continues to give Israel a pass despite growing evidence of abuse over the years.

The practice of this double standard is neither new nor shocking, it is just infuriating. This shows that Western world leaders believe that people of Middle Eastern descent, especially Palestinians, are children of an inferior God. Although I continue to ask questions, I already know the usual canned responses and the words used to deflect criticism — words like “it’s complicated,” “no conclusive evidence,” and “Israeli military disputes findings.” “. And so on.

I ask these questions in order to understand what will make a person pull the trigger.

So here are my questions to the Israeli soldier who pulled the trigger that killed Shireen:

Were you born in Palestine/Israel and if not, where are you from?

Did you come to Israel as a child, or as an adult, because you were taught that Israel is your promised homeland?

What was your childhood dream? Did you dream of being a superhero like most children? And are your superheroes armed soldiers?

Were you taught to hate and fear the Palestinian people? If so, by whom?

Was your family kind to foreigners or were they activists who considered themselves the “chosen people”?

If you had a Bar/Bat Mitzvah, did you promise to do the right thing as practiced by many young Jews celebrating their coming of age?

What was the good thing you promised?

What made you happy as a child, teenager and adult?

Are you religious or secular? Does your ethics adhere to the command “Thou shalt not kill”?

As a high school student, did you have any Palestinian classmates? If so, have you interacted with them?

As you learn about the history of your country, have you learned about the indigenous peoples who have lived on this land for millennia? Or do you believe in the fallacy of “a land without a people for a people without a land?”

Have you ever seen a Palestinian without a uniform? If so, how did your meeting go? What was this experience?

Since military service is mandatory in Israel, did you volunteer to serve in the West Bank or did you just follow your orders without question?

During compulsory military training, did they teach you to fear all Palestinians, including children and the press?

The morning you killed Shireen, were you looking forward to your mission? Where did you apprehend the mission?

Did you drink coffee or another beverage with your breakfast? If yes, did you enjoy or swallow the drink because you got up late?

Did you volunteer for your mission or did you simply follow orders from your superiors?

Did you know, according to international law, that you were encroaching on Palestinian territory?

Did you have time to watch TV or read a newspaper that day? What did you watch or read the news before leaving for your mission?

Did you know anything about Jenin and the people who live there?

What was the atmosphere like when you entered someone else’s country illegally with tanks and guns?

Have you harassed people who were going about their daily lives?

Did you choose one or two children and make them your human shield as usual?

How nervous were you?

When you configured your weapon, did you have a target in mind?

When you pulled the trigger, were you calm, nervous or nonchalant?

Did you watch your targets as they fell face down?

Have you heard and understood the plight of other journalists who have seen you kill and injure their dear colleagues and friends?

Were you gloomy or did you high-five your platoon mates? What were their moods?

Have you ever wondered why you are afraid of all weapons, tanks and guns, while the people you point your guns at are fearless?

Have you ever wondered if your insecurity is related to your oppression against them?

Can you imagine the pain you have inflicted and caused on many families?

Who ordered you to shoot?

What circumstances do you need to justify killing journalists and unarmed civilians?

Is this your first live shoot, or have you participated in other shoots?

What did you tell your family when you got home?

Did you receive a prize for your precision in hitting the target?

Since you were so close to the journalist, did you see her vest with the big letters “PRESS” written on it? If not, were you distracted?

If you were given the order to shoot, did you stop for a minute and think about the harm you might cause? Or were you keen to show off your marksmanship?

Do you think killing unarmed civilians is your patriotic duty, and that you are morally right to save your country?

When you pulled the trigger, did you know that Shireen had a dog that adored her and was waiting for her to come home?

Did you know that Shireen has a small family and tons of friends?

Did you attend his funeral?

Or like most Israelis, did you ignore the suffering of the people you tortured and move on with your life?

A month after the murder, do you have any regrets?

Do you believe that all humans have the same value?

I have so many more questions, but I’ll stop for now.

Those with power over people often think that their guns and bullets give them additional dominance. The bullet that pierced Shireen united a population that is fed up with oppression, colonialism and humiliation. The soldier’s bullet awoke a world that was afraid to stand up to Israel for fear of being labeled anti-Semitic. This photo seen around the world revealed the reality of a shameless criminal army that gains its temporary power by killing, maiming, robbing and imprisoning natives who demand freedom. The bullet that pierced Shireen’s head gave the Palestinian people the ammunition to fight injustice and expose Israel for what it is: an apartheid state that believes in Zionist supremacy.

The soldier who pulled the trigger is the product of a state that has decided its country has no place for indigenous peoples and apparently has an ultimate plan for Palestinian genocide. The strange irony is that this soldier’s gun, marksmanship, and bullets revealed the criminality of their state.

Shireen’s voice and microphone have amplified the voices of brave people who want to be set free. Rest in peace Shireen, you have birthed a new era of courage.

Shireen’s death has sparked a movement and there is no turning back!

So where are the Palestinian voices in the mainstream media?

Mondoweiss covers the full picture of the struggle for justice in Palestine. Read by tens of thousands of people every month, our truth journalism is an essential counterweight to the propaganda that passes for news in mainstream and traditional media.

Our news and analysis are accessible to everyone, which is why we need your support. Please contribute so that we can continue to raise the voice of those who defend the rights of Palestinians to live in dignity and peace.

Today, Palestinians are fighting for their lives as the mainstream media turns away. Please support journalism that amplifies urgent voices calling for freedom and justice in Palestine.