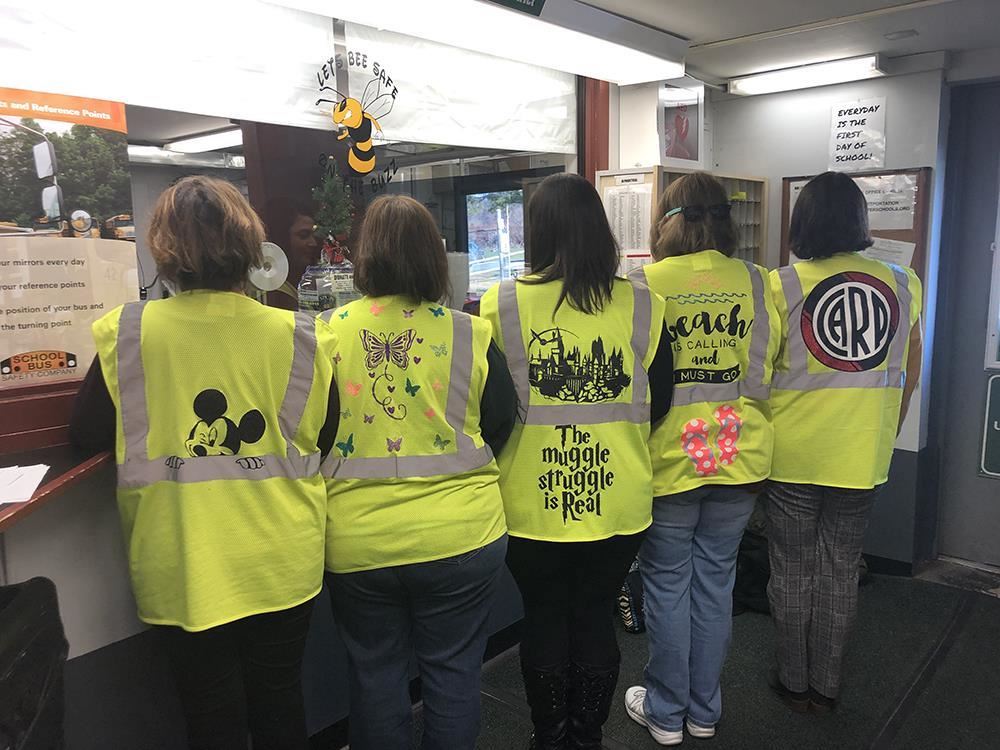 The “Vest Fairy” recently arrived at the Brewster Central School District in New York. Today, her fashion efforts not only improve morale in the transportation department, but also encourage more positive interactions with students who take school buses.

Five years ago, the district decided that all drivers or transportation personnel in the school bus yard wear yellow reflective vests. Mary Smith, transportation supervisor for the district, said the vests help staff be easily visible to motorists, particularly in the early morning, late afternoon or evening.

However, vests quickly became a â€œfashion faux pasâ€ among drivers. Smith explained that when she became a supervisor in 2017, the drivers felt more comfortable approaching her to complain about the vest situation.

â€œI come from the driver population and have evolved into my role here,â€ Smith explained. â€œSo I guess they thought I would have a nicer ear. They started asking, ‘Do we really have to wear it? I certainly didn’t want to bypass security for them, even though they felt bad. comfortable to wear it.

Smith continued, â€œThey started asking, ‘Do we have to wear them while driving? Do we have to wear them when we go to schools to go to the bathroom? ‘ Because they felt like it was a fashion faux pas. It didn’t match their outfits, and they walk into this building with all the educators all dressed so well, and like [school bus driver Irene Farias] said, they felt like a flag on the side of a freeway.

Farias was also tired of hearing her coworkers complaining about the vests and decided to do something about them. She used a fabric cutting machine to make items for her daughter’s wedding, and it quickly became a hobby for her.

[Editorâ€™s Note: The Cricut brand machine Farias uses allows an image or design to be created on a computer before sending it to the machine and printing the image on various materials.]

Farias said she used the machine so much that the idea came to her to Cricut his vest.

â€œI was listening to everyone complaining about their vests, that they are ugly, that they are annoying,â€ Farias said. “I went to the opposite [way], because I am positive. I said I’m going to kiss my waistcoat. I’m going to love my vest and make it my own.

Farias first made decorations for his vest and the concept snowballed from there. His colleagues started asking him to decorate their vests as well. Now Farias has a line of people waiting for the visit of the “vest fairy”.

Vests vary in style and decoration, depending on individual interests. She said people have been asking for sports logos, Harry Potter themes, Disney characters and more.

â€œOne of the women, she would rather be at the beach because she talks about the beach all the time,â€ Smith explained. “[Farias] actually made me a shirt, not a vest, that says, “I made the job great again”, because I’m the new supervisor. The old supervisor has left and morale has been raised. [Farias] helped boost morale.

Farias noted that sometimes people tell her what they want on their vests, while other times she chooses the design based on their personality and what they’re talking about.

â€œShe surprised a few people with vests. Someone retired and she made them a retired Superman vest, â€Smith explained. “I think a few birthdays she gave a vest.”

Farias continued, â€œA dispatcher is a Happy Potter [enthusiast], so she got the ‘Muggle Struggle is Real’, because she doesn’t like going out and driving when we’re short on staff.

Farias has designed around 20 vests so far, but upon entering this year, she will be holding a raffle.

â€œI decided that everyone should love their vests,â€ Farias said. “I’m going to ask anyone who wants their vests made [to] put their name, and twice a month I will choose a name and decorate their vests.

While boosting morale in the department, Smith said the idea gave student pilots another opportunity to positively interact with their drivers. Smith explained that students often only see drivers as disciplinarians, and many young students think drivers never leave the bus.

â€œIt’s fun, but most of all, it inspires kids,â€ Smith said. “[This idea] customize the drivers a bit and invite a friendly conversation about “Hey, you love Micky [Mouse]. ‘ This makes the driver less intimidating, and the instructors too, they also wear the vests. And many monitors have been touched by the fairy.

Farias said the idea was spreading and other surrounding neighborhoods contacted her to decorate their vests. She said she hoped her idea would spread even further, and expressed hope that it could even be used as a community safety campaign.

Man in wetsuit arrested after swimming across Detroit River from Canada to Michigan, federal government says

Zhik relaunches its range of wetsuits for young sailors