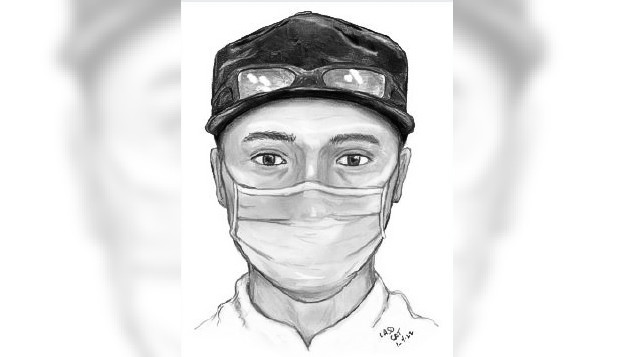 On Friday, authorities circulated a composite drawing of a man wanted for sexually assaulting a girl at Crescenta Valley Skate Park in December.

The crime occurred at the facility on the 3400 block of Honolulu Avenue in La Crescenta on Dec. 12, the Los Angeles County Sheriff’s Department reported.

“The underage victim was exiting the restroom at Crescenta Valley Skate Park … when she was grabbed and sexually assaulted by the suspect,” the sheriff’s department said in a statement.

“The suspect fled the scene on foot heading west over the pedestrian bridge toward the washout and out of sight,” the statement said.

The man was described as Hispanic or Middle Eastern, between 25 and 40 years old, between 5ft 6in and 5ft 8in tall, with a slim build and fair complexion.

He wore a blue surgical mask, a plain brown hat and a pair of sunglasses with green and blue reflective lenses on the visor of his hat. He also wore a white hooded puffy vest, a white long-sleeved shirt under the vest with reflective tape on the left arm, and dark-colored baggy pants.

Anyone with information about the case has been asked to contact the Sheriff’s Special Victims Office by calling 877-710-5273 or emailing specialvictimsbureaulasd.org. Tipsters can also call Crime Stoppers at 800-222-TIPS.

“Glenn Youngkin and his administration are already showing the absolute moral bankruptcy of the Republican Party from DAY ONE! Stop “giving them a chance!”