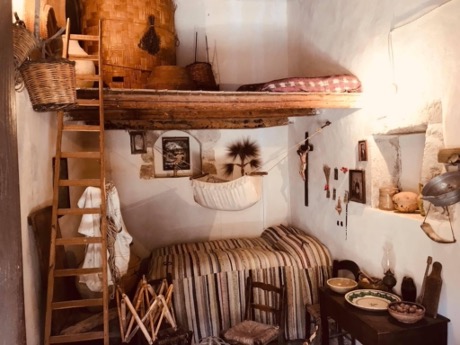 A cradle hangs in a corner amidst a Catholic crucifix and holy palms. This typical early 20th-century Sicilian mansion is one of many places Kerry Wynn visited in 2019.

Naked mining for sulfur and watching water dry into salt were two common occupations for Sicilians around the turn of the 20th century, the period of Wynn’s historical reach, give or take a few decades.

Wynn said the heat experienced by sulfur miners forced them to strip off their clothes. That’s how hot it was. The effects of sulfur mining were equally harmful, and many workers suffered from lung diseases by the age of 40.

“There is a local idea in Sicily, however, that the island’s biggest economic export is actually labour,” Wynn said.

At the turn of the 20th century, one in four Italian immigrants to the United States was Sicilian.

There was political discontent on the island at the time, and other livelihood prospects consisted mainly of farming or fishing. The island’s economic prosperity did not trickle down to the average resident, so many left the island to earn money in America and send it back to their families.

A move to the New York area for a Sicilian was temporary, as they regularly saw their life transatlantic. A mentality focused on their new life and their new country was rare.

“They would be in constant contact with their families overseas throughout their lives,” Wynn said.

Wynn shared photos of the idyllic, pastoral landscapes during her 2019 trip, as well as market scenes in very old towns. These photos featured stone buildings dating from the various cultural empires that have called the island home over the past two millennia.

Karen Camarda, Honors Program Chair and Associate Professor of Physics and Astronomy was one of twelve people present at the conference.

“Before COVID, I used to come there a lot, but I still try to,” Camarda said. “I enjoyed hearing about the different historical sites in Sicily. And I didn’t know much about the history of Sicilian immigration, or rather emigration.