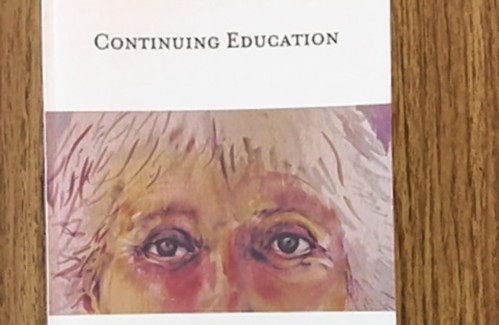 Gary Metras, Easthampton’s first Poet Laureate, has long made the natural world central to his poems, including the woods, fields and hills of the Pioneer Valley. It’s a place he often celebrates, noting the changing seasons and his own love of the outdoors, particularly the meditative experience of fly fishing, something he’s taken up in recent years.

But in “Vanishing Points,” his eighth collection, Metras, a former typographer and publisher, introduces darker notes into his free-verse poems, lamenting the changes human civilization has brought to the world, while contemplating his own mortality, as in “Winter Temperatures”.

“Tonight in New England it’s just zero, / still. Cold enough to dream of death / in the blue-black hours when nothing moves, / when the snowy owl hides in a tree / and wraps its wings around its eyes…”

In “Song of Coming and Going”, the poet contrasts the eternal cycles of nature with the fragile and ephemeral matter of human existence: “And when the stars fade in the dirty clouds / their reflection will cling / to the inner curve of the ripple, / will be breathed deep inside / as the last wave passes, / and no one will will know that the light was ours, / that we were here and left.”

Even in “Narrating the Pond’s Night,” an elegant ode to the sounds and rhythms of nature, the narrator, while fishing in a small pond and pulling a bass from the water, is struck by the smell of “death that germinates under its fins.” The fishing trip also ends on a dark note: “Darkness has swallowed / human output.”

And in “Straight Lines,” Metras is horrified by a huge strip of bulldozed land in Africa, cleared so oil can be detected by satellite: “Except what is made by man, / there are no straight lines / in Africa, no river, no tree trunk, / or lion’s gaze.”

But Metras also brings a bit of dark humor to the collection of “Bad Day”, in which the poem’s narrator, as he drives through an unnamed town, finds a hearse following him block after block. The increasingly nervous driver begins to imagine tombstone epitaphs – but then a truck runs a red light at an intersection and

“T-bones the hearse, / tearing its side, / and the coffin bounces on the asphalt, / the lid opens, / the body flies on the pavement, / dies a second time.”

“Vanishing Points” is divided into four sections, with the first two covering darker ground and the last two providing some contrast to that. The poems in the fourth section, in particular, find understanding and meaning in love: for a partner, for children and grandchildren, for a dying parent.

Joy can come from brief and sudden moments: in “First Spring”, the narrator remembers taking a bit of dry snow in his palm, while his granddaughter “I blew the white petals on my face / and laughed.

And in the title poem of the collection, Metras finds happiness in the shared warmth of a long-standing relationship: “Love, when it remains, is without a trace… // The single piece of coarse cloth drapes us both / and softens our curves so that our lives fit together well. // When two people travel far enough in the distance / they merge.

Continuing education by Lisa Colt; Out of common books

Lisa Colt, who was born in 1930, has been many things in her life: nursing student, high school teacher, painter and musician, mother, wife. Colt, from Easthampton, has also been a poet – and now she has published her first collection, ‘Continuing Education’, which features poems that date back half a century, including titles she has previously published in various journals .

Colt presents the collection as a school curriculum, with 10 chapters titled “History”, “Science and Nature”, “Art” and other subjects. But since the poems offer snapshots of his life, there are four sections titled “History” — and one titled “Continuing Education.”

His mostly short free verse poems offer equal measures of humor and emotion. “Sacred Heart” recalls a day at the Catholic school where the 11-year-old narrator, overhearing the older girls “talking dirty” in the bathroom, “I scratched ‘funk’ on the cubicle wall, / then prayed for absolution.

But a certain Sister Ann Cordelia simply tells her that she misspelled the word and asks her to say 20 Hail Marys. “Suddenly I loved her / passionately, immaculate, / more even than I loved my mother, / more even than our Lord.”

There is also an ode to Amherst’s Belle, “On Learning That Emily Dickinson’s Hair Was Red”, in which Colt, who once taught art and English, evokes the fierce spirit of Dickinson’s writing. and its contrast with his reclusive lifestyle and demure image. from the only known daguerreotype of the poet.

“I mean the fire, how – / when the writing was done, / a cup of tea cooled beside her – / she unrolled the copper coil to her neck, / shook it like a cashmere shawl, setting fire / the property and the village beyond / with the shock of her loose hair.

War scars: In the poem ‘History’, Holt recalls how her late husband, Henry, was shot down over occupied Belgium during World War II on his first mission in a B-17 bomber ; he survived serious injuries, then with the help of members of the resistance, he returned to England. Years later, he would smile at the mention of history and say, “It’s all history.”

But, writes Colt, “I’ve watched you over the years, I’ve seen how / when I reach out / or when one of our four sons / kisses goodbye, you cry.”

However, in “Harry in the Garden”, she also celebrates her husband, a “beloved believer in order”, and her determination to take away the autumn leaves, “with a plastic bag in one hand, / rake like a saber in the other… your gift to me: absolute certainty / that as long as the leaves fall / you’ll be there to catch them.”

Given her long life, Colt lost a number of people close to her and saw one war after another follow World War II. But in “Reflections”, she writes that she has found some peace and acceptance with where life has taken her and with her own body, from “beaten thighs” at “Deeply cracked face.”

Steve Pfarrer can be contacted at
[email protected]

“I played Point Guard and Quarterback growing up, so vision has always been in my repertoire!” : ‘Sea Captain’ Klay Thompson talks about his performance tonight, especially his back passes