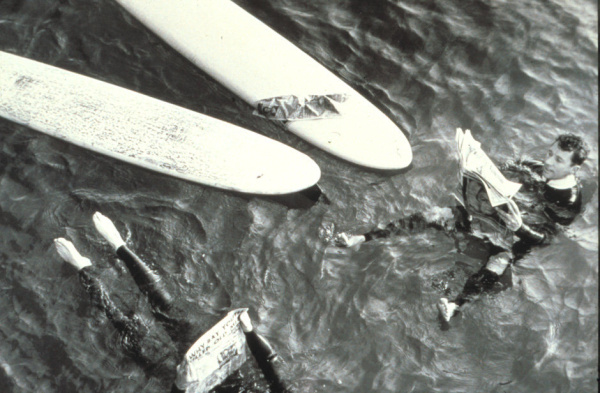 Jack O’Neill recalls Northern California waters being so freezing winter surf sessions barely lasted an hour before ice cream headaches forced many surfers to end their sessions no matter what. or the quality of the waves.

After leaving the ocean, O’Neill and his friends burned old tires on the beach to thaw their numb bodies.

“I was just looking for ways to stay warm,” O’Neill said.

Surfers had few options in winter until O’Neill created the first surf suit, which celebrated its 60th anniversary this year. His invention – a short-sleeved neoprene vest – drew teasing from surfers, but ultimately allowed them to last longer in cold water.

The guys in the training were making jokes about the weird thing he was wearing. O’Neill remembers a friend saying, “You’re going to sell to five guys on the beach, and you’re going to go broke.”

O’Neill landed in the surfing industry after his career took an unexpected turn. In the early 1950s, he took a desk job in San Francisco and returned to his office one day after a surf session, his sinuses still filled with salt water. He bent over some papers and water gushed out of his nose, soaking the papers. The accident, he says, prompted his boss to fire him soon after.

So he bought some balsa wood and started making surfboards. In 1952, he opened the first surf shop in San Francisco. O’Neill still owns the trademark for the word “surf shop”, but he never sued after opening numerous surf shops over the decades.

The O’Neill brand would go on to become one of the largest surfing companies in the world, with the Irvine-based La Jolla Group acting as the licensee for the company’s apparel division. Its creation allowed the masses to surf comfortably year-round and spawned a $100 million+ wetsuit industry.

Along with opening his surf shop, O’Neill had also racked his brains trying to figure out ways to stay in the water longer.

His first attempt was with PVC foam, which he put inside his swim bottoms. Next comes a vest. He put plastic on the outside so the water ran off the surface instead of being sucked into the foam, but the creation wouldn’t last long in the ocean. Another problem: the fit was suffocating and restricted movement.

A friend working in a lab suggested using a material called neoprene. O’Neill experimented with the product and invented the first wetsuit vest. In the 1950s, there wasn’t a big market for this new creation, especially in Northern California, where you could often go a month without seeing another surfer in the water.

Rumor has spread about this innovation. No surf magazines existed, so O’Neill got creative by putting his kids in costume on blocks of ice outside sports shows to show how they would withstand the cold, Kilpatrick said.

Manhattan Beach-based Body Glove began experimenting with neoprene in 1953. But with few surf companies on the market, O’Neill had years to perfect the suit.

O’Neill extended the vest to a beavertail jacket and long johns, then a spring suit with a tank top and short legs, and finally, the full suit.

“There was no competition in the 1950s; nobody even thought about it,” Kilpatrick said. “We were virtually unchallenged.”

Dick Metz, who was surfing long before wetsuits hit the scene, remembers leaving Laguna Beach to go to school in Santa Barbara. Metz and his surfer friends would go to the surplus store and buy army wool sweaters to wear in the water.

This was the days before leashes, so surfers had to swim after their boards as the waves carried them to shore, and soaked wool sweaters dragged them down.

Word of the suit spread by word of mouth along the California coast, and surfers began calling O’Neill from places like South Africa, Australia and Europe. O’Neill created the first full costume, called “Animal Skin”. It would remain the best-selling wetsuit for the next 30 years.

“With the advent of the wetsuit and the evolution of the surfboard, you can now surf anywhere. Guys are surfing in Antarctica and Canada,” Metz said. develop.”

In the ’60s, Gidget, the Beach Boys, surf magazines and movies hit the streets, sending more surfers into the water – and more surfers trying to warm up in the ocean. In 1970, Costa-Mesa-based Rip Curl started releasing wetsuits, and by the 1980s almost every surf company made some version of the wetsuit.

While most surfers praise the invention of the wetsuit, others blame O’Neill for sending more people into the water.

“I’m accused of making it too busy, of making it crowded,” O’Neill said. “Guys like to have their own waves.”

The wetsuit industry has become an important part of the surf industry. Wetsuit sales at surf stores increased to $110.4 million in 2010, a 24.5% jump from 2008, according to the Surf Industry Manufacturing Association’s retail distribution study in 2010, with last year’s data available. Nearly half of total sales in 2010 were made on the West Coast.

“The increase in wetsuit sales could be attributed to record low temperatures in Southern California during the year, as well as the evolving innovation and technology used in wetsuits over the past year. the past two years,” the report said.

The bulk of sales came from fullsuits, and an average of 139 fullsuits sold per store at an average price of $217, according to the study.

Sixty years after creating the suit, O’Neill is enjoying semi-retired life in Santa Cruz, where his home overlooks the Pacific Ocean. He is 89 years old and very active in the company, particularly in the suits division, which is based in Santa Cruz and continues to hold more than half of the market share in the suits industry.

In 1991 O’Neill was inducted into the International Surfing Hall of Fame at Huntington Beach, and in 1998 joined the Huntington Beach Surfing Walk of Fame. In 2000, he was named Waterman of the Year by the Surf Industry Manufacturing Industry.

The evolution of the wetsuit continues, as major surf brands compete to make the warmest, lightest and most flexible wetsuits on the market.

Here are some recent innovations in wetsuit development:

The Psycho series with TechnoButter is the latest invention released in the fall of this year. It is 30% lighter than previous wetsuits and absorbs 20% less water, allowing it to dry faster. The jersey on the outside is quick-drying and extremely light. The costume is up for a SIMA Image Award on Feb. 7 at The Grove in Anaheim. Retail price ranges from $300 to $570, depending on model.

In 2009, the Costa Mesa-based brand introduced the first battery-powered heated suit with its H-bomb, but high costs caused the company to pull the full suit from the market. now only the H Bomb vest – which works under a regular wetsuit – is available. Retail: $300.

In 2011 Rip Curl introduced the Flash Bomb wetsuit, which has a liner that wicks water away from the inside of the suit seconds after being exposed to the air, trapping moisture in the suit and wicking it away quickly. The suit becomes dry and warm to the touch in 30 minutes and is touted as the “world’s fastest drying suit”. The Flash Bomb won last year’s SIMA Image Award for Combination of the Year and is in the running again this year. Retail: $400, a Flashbomb Plus is $500.

As more surfers get into extreme waves, Irvine-based Billabong teamed up with former round-the-world surfer Shane Dorian in 2011 to develop the Billabong V1 wetsuit, which helps propel a surfer on the surface of the water after being pulled underwater. The idea came from a near-drowning incident at Mavericks in Northern California.

After a wipeout, the surfer pulls an attached launch cord, which triggers a carbon dioxide canister that inflates an airbag in the back of the suit. The surfer then rises to the surface of the water in a few seconds. Billabong worked with a company that manufactures military survival gear to create the Billabong V1 suits. The wetsuit is not available to the general public, but is made for big wave surfers.

The Ventura-based company made headlines when it launched a wool-lined suit a few years ago, and in November the company broke new ground again by announcing an eco-friendly suit created with renewable bio-rubber instead of fossil-based neoprene used for most other wetsuits. Patagonia partnered with Yulex Corp., a clean tech company, to make the suit from 60% guayule, a plant-based material. The goal is to make a costume made of 100% plant materials. Currently, the biorubber suits are available in Japan, but by spring 2013 customers will be able to order the suits from the Ventura plant, with global rollout to follow.

Additionally, Patagonia announced on December 10 the creation of a wearable self-inflating vest for big wave surfers. The company teamed up with surfer Kohl Christensen for ideas and testing. The vest can be worn under different types of wetsuits, has an air release valve, and allows a surfer to paddle and swim when fully inflated. The vest is still in the testing phase and is not yet available in stores.

Safety vest for surveyors – from Ergodyne

The easiest way to put on a wetsuit