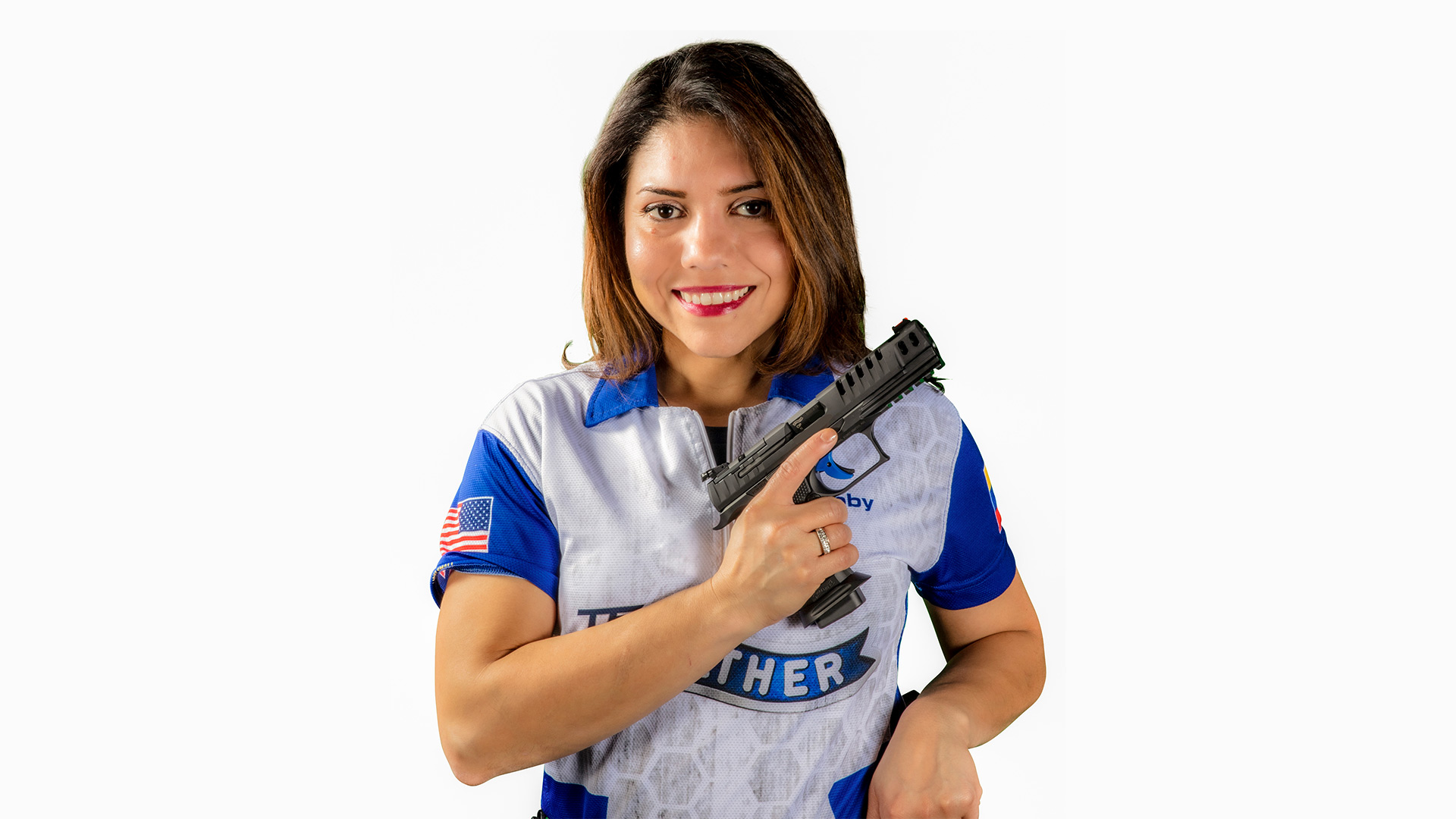 What’s in your backpack, Gabby Franco?

Despite being a full-time student, mother, wife, and instructor, Gabby Franco finds time to compete in the United States, earning multiple High Lady trophies and medals in the USPSA Limited and Carry Optics divisions. A six-time Venezuelan national champion in air pistol and sports, Franco also represented her home country at the 2000 Olympics in Sydney, Australia.

Gabby Franco says she still has “a long way to go in my journey as an athlete. But I keep moving forward, no matter the setbacks.

What are your earliest memories of handling a firearm?

When I was 11, my father introduced my two sisters and me to Olympic shooting sports in my home country of Venezuela. I practiced with air pistols (.177 cal.) to start with, then switched to sporting pistols with a .22 Long Rifle handgun. The shot seemed easy, as neither the target nor myself moved. Still, hitting a centimeter target at 10 yards was a challenge.

Later, a trainer came to our home area to train us. His knowledge and his passion for the sport have reinforced my interest in practice and competition. I don’t believe that the love of firearms, in and of itself, drove me to pursue a career in sport shooting. On the contrary, I loved what he was doing in my life. Shooting made me more responsible. I was impressed with the improvements brought about by the training. More importantly, I learned to say “No!” to my high school classmates when their plans could jeopardize my training or competitions.

Tell us about your beginnings in competitive shooting.

Advanced shooters volunteered to train us whenever they could. My father used to take us to the shooting range once or twice a week to practice. After our shooting club hired a coach to train the junior shooting team, we practiced almost every day. In 1996, our coach signed us up for a popular shooting tournament in our town. It was the first time I competed with good preparation and the support of a fantastic coach. I won a bronze medal at this competition, which led the shooting officials to consider me a potential member of the national team. A year later, I turned 16 and participated in the 1997 Bolivarian Games in Arequipa, Peru, where I won my first international silver medal.

What firearms and other equipment do you use for competition?

Right now I’m shooting a Walther Arms Q5 Steel Frame in 9mm for USPSA carry optics division. I practice with the Walther PDP pistol in 9 mm because it is an excellent defensive handgun. My concealed carry pistol is the PPQ subcompact pistol in 9mm. Plus, I make my own ammunition. (Okay, husband helps me too.) As for optics, I’ve been shooting iron sights for over 25 years, so shooting red dot optics has been a challenge that I learned to love. It also helped me improve my shooting speed and quick movement when moving around the shooting range. I am about to receive the SLX red dot from Primary Arms which I can’t wait to try.

Tell us about your shooting bag and what you carry in it besides your firearms.

I use a Primary Arms backpack which has everything I need. It has several different compartments to keep my tools and accessories separated, but accessible. This backpack comes in handy even when I’m using a reach wagon, as it can open wide so I can see inside quickly. I always keep the following accessories in my backpack:

What would you say to someone who wants to know more about your sport?

First, go to the USPSA website to find the nearest shooting club that offers these competitions. Second, visit the club and watch and talk to shooters. The shooting community is always receptive to those who want to learn, while taking one step at a time to both be safe and improve their skills. Third, get out and participate. It’s the best way to improve anything. Also, be sure to check out Walther Arms and Primary Arms. These companies are incredible supporters of what I do as a marksmanship athlete, firearms instructor, and Second Amendment advocate.

Any tips for new shooters?

First of all, be careful and responsible. Second, seek training from reputable instructors. Bad habits are easy to memorize and difficult to replace once they are ingrained in our subconscious. Moreover, practice is essential for absolutely all disciplines, and shooting is no exception. Training in the practice of dry firing is necessary to maintain superior proficiency with the handling, accuracy, and speed of your firearm. Last but not least, educate yourself on your Second Amendment rights and educate yourself on why gun control puts citizens in a vulnerable position.

8 things you know to be true if your child loves fashion.